Bleeding disorders are a group of conditions in which there is a problem with the body's blood clotting process. These disorders can lead to heavy and prolonged bleeding after an injury. Bleeding can also begin on its own. 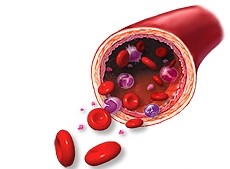 Normal blood clotting involves blood components called platelets and as many as 20 different plasma proteins. These are known as blood clotting or coagulation factors. These factors interact with other chemicals to form a substance called fibrin that stops bleeding.

Problems can occur when certain factors are low or missing. Bleeding problems can range from mild to severe.

Some bleeding disorders are present at birth and are passed through families (inherited). Others develop from:

·       Illnesses such as vitamin K deficiency or severe liver disease

Bleeding disorders can also result from a problem with the number or function of the blood cells that promote blood clotting (platelets). These disorders can also be either inherited or develop later (acquired). The side effects of certain drugs often lead to the acquired forms.

Symptoms may include any of the following:

The type of problems that occur depend on the specific bleeding disorder, and how severe it is.

Tests that may be done include:

Treatment depends on the type of disorder. It may include:

Outcome also depends on the disorder. Most primary bleeding disorders can be managed. When the disorders is due to diseases, such as DIC, the outcome will depend on how well the underlying disease can be treated.

·       Severe bleeding (usually from the gastrointestinal tract or injuries)

Other complications can occur, depending on the disorder.

Call your health care provider if you notice any unusual or severe bleeding.

Prevention depends on the specific disorder.

Синонимы:
Coagulopathy
Information presented on this website is for general use. It intended to address issues of your concern. It is not intended to serve as a basis for professional diagnosis and treatment of diseases or health conditions.
Should you have health problems we suggest you to seek assistance from a licensed healthcare professional and medical organization. In the case of a medical emergency, please call emergency services immediately.