An insulinoma is a tumor in the pancreas that produces too much insulin. 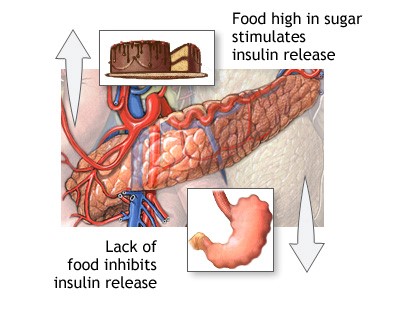 Insulin is a hormone secreted by the pancreas in response to increased glucose levels in the blood.

The pancreas is an organ in the abdomen. The pancreas makes several enzymes and hormones, including the hormone insulin. Insulin's job is to reduce the level of sugar (glucose) in the blood by helping it move into cells.

A high blood insulin level causes a low blood sugar level (hypoglycemia). Hypoglycemia may be mild, leading to symptoms such as anxiety and hunger. Or it can be severe, leading to seizures, coma, and even death.

Insulinomas are rare tumors. They usually occur as single, small tumors in adults.

These tumors are very rare in children. Most children with high blood insulin levels have many areas of overactive insulin-releasing cells in the pancreas, instead of a single tumor.

After fasting, your blood may be tested for:

CT or MRI scan of the abdomen, or PET scan may be done to look for a tumor in the pancreas. If the test is negative, one of the following tests may be performed:

Surgery is the recommended treatment for insulinoma. The tumor is first found by tests or surgery. Medication may be used to get patients stable before surgery.

If there is a single tumor, it will be removed. If there are many tumors, part of the pancreas will need to be removed (partial pancreatectomy). At least 15% of the pancreas must be left to produce its enzymes for digestion. This may prevent the surgeon from removing the whole insulinoma tumor.

If no tumor is found during surgery, or if you are not a candidate for surgery, you may get the drug diazoxide to lower insulin production and prevent hypoglycemia. A diuretic (water pill) is given with this medication to prevent the body from retaining fluid. Octreotide is used to reduce insulin release in some patients.

In most cases, the tumor is non-cancerous (benign), and surgery can cure the disease. But a severe hypoglycemic reaction or the spread of a cancerous tumor to other organs can be life-threatening.

Call your health care provider if you develop any symptoms of insulinoma. Convulsions and decreased consciousness are an emergency -- call 911 or your local emergency number right away.

Теги:
инсулома
поджелудочная железа
онкология
опухоль поджелудочной железы
лечение онкологии
Information presented on this website is for general use. It intended to address issues of your concern. It is not intended to serve as a basis for professional diagnosis and treatment of diseases or health conditions.
Should you have health problems we suggest you to seek assistance from a licensed healthcare professional and medical organization. In the case of a medical emergency, please call emergency services immediately.