Irritable bowel syndrome (IBS) is a disorder that leads to abdominal pain and cramping, changes in bowel movements, and other symptoms.

IBS is not the same as inflammatory bowel disease (IBD), which includes Crohn's disease and ulcerative colitis. In IBS, the structure of the bowel is not abnormal. 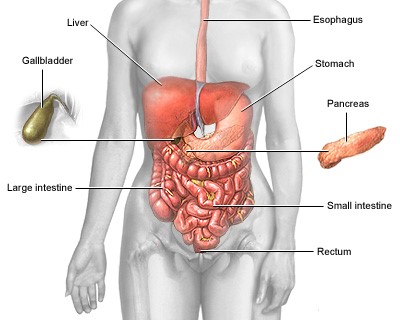 It is not clear why patients develop IBS. Sometimes it occurs after an infection of the intestines. This is called postinfectious IBS. There may also be other triggers.

The intestine is connected to the brain. Signals go back and forth between the bowel and brain. These signals affect bowel function and symptoms. The nerves can become more active during stress, causing the intestines to be more sensitive and squeeze (contract) more.

IBS can occur at any age, but it often begins in the teen years or early adulthood. It is twice as common in women as in men.

IBS is the most common intestinal problem that causes patients to be referred to a bowel specialist (gastroenterologist).

Symptoms range from mild to severe. Most people have mild symptoms. Symptoms are different from person to person.

The main symptoms of IBS are abdominal pain, fullness, gas, and bloating that have been present for at least 3 days a month for the last 3 months. The pain and other symptoms will often:

People with IBS may switch between constipation and diarrhea, or mostly have one or the other.

For some people, the symptoms may get worse for a few weeks or a month, and then decrease for a while. For other people, symptoms are present most of the time.

People with IBS may also lose their appetite.

There is no test to diagnose IBS. Tests may be done to rule out other problems:

Some patients will have a colonoscopy. During this test, a flexible tube is inserted through the anus to examine the colon. You may need this test if:

Other disorders that can cause similar symptoms include:

The goal of treatment is to relieve symptoms.

Lifestyle changes can help in some cases of IBS. For example, regular exercise and improved sleep habits may reduce anxiety and help relieve bowel symptoms.

Dietary changes can be helpful. However, no specific diet can be recommended for IBS, because the condition differs from one person to another.

The following changes may help:

Talk with your doctor before taking over-the-counter medications.

No one medication will work for everyone. Medications your doctor might try include:

Therapy may help in cases of severe anxiety or depression.

Irritable bowel syndrome may be a lifelong condition. For some people, symptoms are disabling and reduce the ability to work, travel, and attend social events.

Symptoms can often be improved or relieved through treatment.

IBS does not cause permanent harm to the intestines, and it does not lead to a serious disease, such as cancer.

Diarrhea (male | female)
Swollen Abdomen (male | female)
Constipation (female | male)
Теги:
Crohn's disease
ulcerative colitis
stress
gastroenterologist
adulthood
Information presented on this website is for general use. It intended to address issues of your concern. It is not intended to serve as a basis for professional diagnosis and treatment of diseases or health conditions.
Should you have health problems we suggest you to seek assistance from a licensed healthcare professional and medical organization. In the case of a medical emergency, please call emergency services immediately.