What is the pancreas?

Where is the pancreas?

The Shape of the Pancreas

The pancreas has two functional components

How does it all fit together?

What is pancreatic fluid?

What is the pancreas?

The pancreas is a long flattened gland located deep in the belly (abdomen). Because the pancreas isn’t seen or felt in our day to day lives, most people don't know as much about the pancreas as they do about other parts of their bodies. The pancreas is, however, a vital part of the digestive system and a critical controller of blood sugar levels.

Where is the pancreas?

The pancreas is located deep in the abdomen. Part of the pancreas is sandwiched between the stomach and the spine. The other part is nestled in the curve of the duodenum (first part of the small intestine). To visualize the position of the pancreas, try this: touch your right thumb and right "pinkie" fingers together, keeping the other three fingers together and straight. Then, place your hand in the center of your belly just below your lower ribs with your fingers pointing to your left. Your hand will be the approximate shape and at the approximate level of your pancreas.

Because of the deep location of the pancreas, tumors of the pancreas are rarely palpable (able to be felt by pressing on the abdomen). This explains why most symptoms of pancreatic cancer do not appear until the tumor has grown large enough to interfere with the function of the pancreas or other nearby organs such as the stomach, duodenum, liver, or gallbladder. 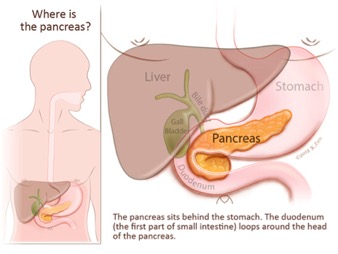 Your doctor may refer to different anatomic parts of the pancreas when discussing your disease. The part of the pancreas that a tumor arises in will affect the symptoms it causes and how it is treated. The pancreas is divided into four main parts. 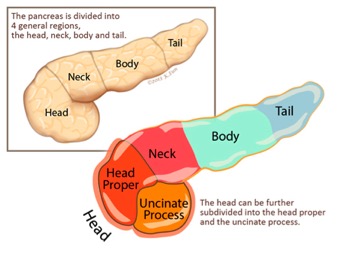 The Shape of the Pancreas

The pancreas has two functional components

The pancreas is really two glands that are intimately mixed together into one organ. The bulk of the pancreas is composed of “exocrine” cells that produce enzymes to help with the digestion of food. These exocrine cells release their enzymes into a series of progressively larger tubes (called ducts) that eventually join together to form the main pancreatic duct. The main pancreatic duct runs the length of the pancreas and drains the fluid produced by the exocrine cells into the duodenum, the first part of the small bowel.

The second functional component of the pancreas is the "endocrine" pancreas. The endocrine pancreas is composed of small islands of cells, called the islets of Langerhans. These endocrine cells don’t release their secretions into the pancreatic ducts, instead they release hormones, such as insulin and glucagon, into the blood stream, and these hormones in turn help control blood sugar (glucose) levels. 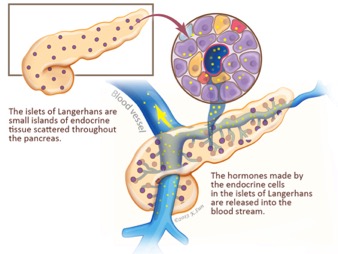 An understanding of the two functional components of the pancreas is important for two reasons.

The second reason that the two functional components of the pancreas are important to understand is that tumors can arise in either component. The vast majority of tumors of the pancreas arise in the exocrine part and these cancers look like pancreatic ducts under the microscope. These tumors are therefore called "ductal adenocarcinomas," or simply "adenocarcinoma," or even more simply "pancreatic cancer." Less commonly, tumors arise from the endocrine component of the pancreas and these endocrine tumors are called "pancreatic neuroendocrine tumors," or "islet cell tumors" for short.

How does it all fit together?

The duodenum then leads to the other parts of the small bowel, the jejunum and ileum, where further digestion of food takes place. The ileum then empties into the large bowel (also known as the large intestine), and finally completely digestive material passes out of the body through the anus.

Bile is important to understand because the flow of bile is often blocked by pancreatic cancers, and because the flow of bile is altered during surgery for pancreatic cancer. Bile is a greenish-yellow fluid that aids in the digestion of fats in food. After being produced by cells in the liver, the bile travels down through the bile ducts which merge with the cystic duct from the gallbladder to form the common bile duct. The gallbladder stores extra bile until needed. The common bile duct then passes through the head of the pancreas and joins the pancreatic duct to form the ampulla of Vater which then empties into the duodenum. The flow of bile is indicated by the green arrows. 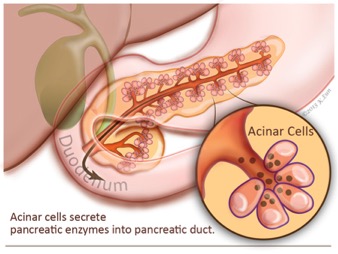 Understanding that the tube (duct) carrying bile from the liver passes through the pancreas on its way to the intestine, helps us understand why some people with pancreatic cancer develop jaundice (an abnormal yellowing of the skin and eyes). Pancreatic cancers in the head of the pancreas (the bile duct passes through the head of the pancreas) can block the bile duct and in so doing can block the flow of bile out of the liver. The bile backs up and causes jaundice.

What is pancreatic fluid? 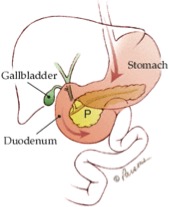 Теги:
печень
инсулин
диабет
ферменты
Information presented on this website is for general use. It intended to address issues of your concern. It is not intended to serve as a basis for professional diagnosis and treatment of diseases or health conditions.
Should you have health problems we suggest you to seek assistance from a licensed healthcare professional and medical organization. In the case of a medical emergency, please call emergency services immediately.