What is Peyronie's disease?

What can I do about the curve in my penis?

What is Peyronie's disease? 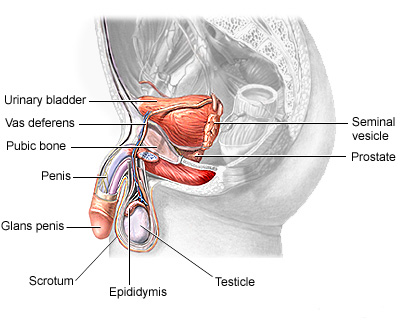 The male reproductive structures include the penis, the scrotum, the seminal vesicles and the prostate.

What can I do about the curve in my penis?

Another treatment option is an intralesional injection. This means the doctor would give you a shot directly into the scar tissue. The shot contains the drug verapamil. Verapamil may help break down the scar tissue and allow new tissue to grow. These shots are usually given over 3 months.

Surgery might help men who have pain during erection or men who can't keep an erection long enough to have sex. There are several surgical procedures that can help. One option is to have a prosthesis (something to make the penis firm) put in the penis. The prosthesis helps make the penis straighter. It also helps erections last longer. Another option is to have the scar tissue removed from the penis. Your doctor can explain all surgical options and can help you decide which is best for you.

Problems with Penis (male)
Теги:
искривление полового члена
травма
рубец ткани под кожей полового члена
Information presented on this website is for general use. It intended to address issues of your concern. It is not intended to serve as a basis for professional diagnosis and treatment of diseases or health conditions.
Should you have health problems we suggest you to seek assistance from a licensed healthcare professional and medical organization. In the case of a medical emergency, please call emergency services immediately.