Placenta previa is a problem of pregnancy in which the placenta grows in the lowest part of the womb (uterus) and covers all or part of the opening to the cervix.

The placenta grows during pregnancy and feeds the developing baby. The cervix is the opening to the birth canal.

Sometimes, the placenta partly or completely covers the cervix. This is called a previa. 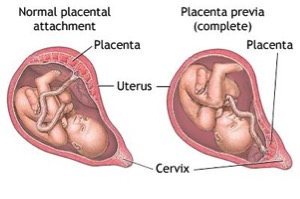 There are different forms of placenta previa:

Placenta previa occurs in 1 out of 200 pregnancies. It is more common in women who have:

Women who smoke, use cocaine, or have their children at an older age may also have an increased risk.

The main symptom of placenta previa is sudden bleeding from the vagina. Some women also have cramps. The bleeding often starts near the end of the second trimester or beginning of the third trimester.

Bleeding may be severe and life threatening. It may stop on its own, but can start again days or weeks later.

Labor sometimes starts within several days of the heavy bleeding. Sometimes, bleeding may not occur until after labor starts.

Your health care provider can diagnose this condition with a pregnancy ultrasound.

Your provider will carefully consider the risk of bleeding against early delivery of your baby. After 36 weeks, delivery of the baby may be the best treatment.

Nearly all women with placenta previa need a C-section. If the placenta covers all or part of the cervix, a vaginal delivery can cause severe bleeding. This can be deadly to both the mother and baby.

If the placenta is near or covering part of the cervix, your provider may recommend:

Nothing should be placed in the vagina.

You may need to stay in the hospital so your health care team can closely monitor you and your baby.

Other treatments you may receive:

An emergency C-section may be done if the bleeding is heavy and cannot be controlled.

The biggest risk is severe bleeding that can be life threatening to the mother and baby. If you have severe bleeding, your baby may need to be delivered early, before major organs, such as the lungs, have developed.

Call your provider if you have vaginal bleeding during pregnancy. Placenta previa can be dangerous to both you and your baby.

Необычное кровотечение из влагалища (женщина)
Теги:
предлежание плаценты
беременность
осложнение беременности. патология
роды
Синонимы:
Vaginal bleeding - placenta previa; Pregnancy - placenta previa
Information presented on this website is for general use. It intended to address issues of your concern. It is not intended to serve as a basis for professional diagnosis and treatment of diseases or health conditions.
Should you have health problems we suggest you to seek assistance from a licensed healthcare professional and medical organization. In the case of a medical emergency, please call emergency services immediately.