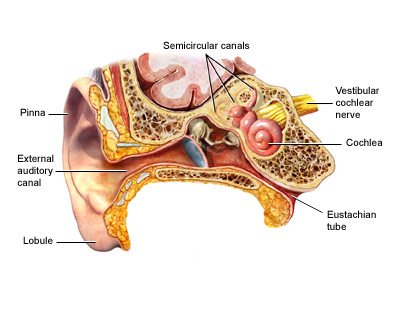 Ear infections may cause a ruptured eardrum. This occurs more often in children. The infection causes pus or fluid to build up behind the eardrum. As the pressure increases, the eardrum may break open (rupture).

Damage to the eardrum can also occur from:

·       A rapid change in ear pressure, which may occur when flying, scuba diving, or driving in the mountains

Ear pain may suddenly decrease right after your eardrum ruptures.

After the rupture, you may have:

The health care provider will look in your ear with an instrument called an otoscope. If the eardrum is ruptured, the doctor will see an opening in it. The bones of the middle ear may also be visible.

Pus draining from the ear may make it harder for the doctor to see the eardrum.

Audiology testing can measure how much hearing has been lost.

You can take steps at home to treat ear pain.

·       Put warm compresses on the ear to help relieve discomfort.

·       Use medicines such as ibuprofen or acetaminophen to ease pain.

The opening in the eardrum most often heals by itself within 2 months if it is a small hole. Keep the ear clean and dry while it is healing.

·       Place cotton balls in the ear while showering or shampooing to prevent water from entering the ear.

·       Avoid swimming or putting your head underneath the water.

Your provider may prescribe antibiotics (oral or ear drops) to prevent or treat an infection.

Repair of the eardrum might be needed for larger holes or ruptures or if the eardrum does not heal on its own. This can be done either in the office or under anesthesia.

·       Patch the eardrum with a piece of the person's own tissue taken (called tympanoplasty). This procedure will usually take 2 to 3 hours.

·       Repair smaller holes in the eardrum by placing either gel or a special paper over the eardrum (called myringoplasty). This procedure will usually take 10 to 30 minutes.

The opening in the eardrum most often heals by itself within 2 months if it is a small hole.

Hearing loss will be short-term if the rupture heals completely.

Rarely, other problems may occur, such as:

·       Spread of infection to the bone behind the ear (mastoiditis)

If your pain and symptoms improve after your eardrum ruptures, you may wait until the next day to see your provider.

Call your provider right away after your eardrum ruptures if you:

·       Have any symptoms that last longer than 2 months after treatment

DO NOT insert objects into the ear canal, even to clean it. Objects stuck in the ear should only be removed by a provider. Have ear infections treated promptly.

Синонимы:
Tympanic membrane perforation; Eardrum - ruptured or perforated; Perforated eardrum
Information presented on this website is for general use. It intended to address issues of your concern. It is not intended to serve as a basis for professional diagnosis and treatment of diseases or health conditions.
Should you have health problems we suggest you to seek assistance from a licensed healthcare professional and medical organization. In the case of a medical emergency, please call emergency services immediately.