Syphilis is bacteria infection that is most often spread through sexual contact.

Syphilis is a sexually transmitted, infectious disease caused by the spirochete Treponema pallidum. This bacterium causes infection when it gets into broken skin or mucus membranes, usually of the genitals. Syphilis is most often transmitted through sexual contact, although it also can be transmitted in other ways. 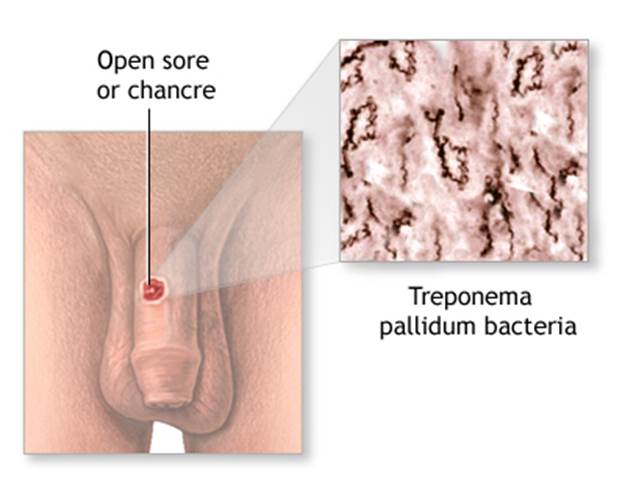 Syphilis occurs worldwide. Syphilis is more common in urban areas, and the number of cases is rising fastest in men who have sex with men. Young adults ages 15 - 25 are the highest-risk population. People have no natural resistance to syphilis.

Because people may be unaware that they are infected with syphilis, many states require tests for syphilis before marriage. All pregnant women who receive prenatal care should be screened for syphilis to prevent the infection from passing to their newborn (congenital syphilis).

Secondary syphilis, tertiary syphilis, and congenital syphilis are not seen as often in the United States as they were in the past because of the availability of:

Symptoms of primary syphilis are:

The bacteria continue to grow in the body, but there are few symptoms until the second stage.

Secondary syphilis symptoms may include:

Symptoms of tertiary syphilis depend on which organs have been affected. They vary widely and are difficult to diagnose. Symptoms include:

The doctor or nurse will examine you. Tests that may be done include:

Syphilis can be treated with antibiotics, such as penicillin G benzathine, doxycycline, or tetracycline (for patients who are allergic to penicillin). Length of treatment depends on how severe the syphilis is, and factors such as the patient's overall health.

For treating syphilis during pregnancy, penicillin is the drug of choice. Tetracycline cannot be used because it is dangerous to the unborn baby. Erythromycin may not prevent congenital syphilis in the baby. People who are allergic to penicillin should ideally be desensitized to it, and then treated with penicillin.

Several hours after getting treatment for the early stages of syphilis, people may experience Jarish-Herxheimer reaction. This is caused by an immune reaction to the breakdown products of the infection.

Symptoms and signs of this reaction include:

These symptoms usually disappear within 24 hours.

Follow-up blood tests must be done at 3, 6, 12, and 24 months to ensure that the infection is gone. Avoid sexual contact when the chancre is present, and use condoms until two follow-up tests have indicated that the infection has been cured.

All sexual partners of the person with syphilis should also be treated. Syphilis is extremely contagious in the primary and secondary stages.

Syphilis can be cured if it is diagnosed early and completely treated.

Secondary syphilis can be cured if it is diagnosed early and treated effectively. Although it usually goes away within weeks, in some cases it may last for up to 1 year. Without treatment, up to one-third of patients will have late complications of syphilis.

Late syphilis may be permanently disabling, and it may lead to death.

In addition, untreated secondary syphilis during pregnancy may spread the disease to the developing baby. This is called congenital syphilis.

Call for an appointment with your health care provider if you have symptoms of syphilis.

If you have had intimate contact with a person who has syphilis or any other STI, or have engaged in any high-risk sexual practices, including having multiple or unknown partners or using intravenous drugs, contact your doctor or nurse, or get screened in an STI clinic.

If you are sexually active, practice safe sex and always use a condom.

All pregnant women should be screened for syphilis.

Problems with Penis (male)
Теги:
syphilis
sexually transmitted diseases
std
sti
open sore
enlarged lymph nodes
rash
fever
Information presented on this website is for general use. It intended to address issues of your concern. It is not intended to serve as a basis for professional diagnosis and treatment of diseases or health conditions.
Should you have health problems we suggest you to seek assistance from a licensed healthcare professional and medical organization. In the case of a medical emergency, please call emergency services immediately.