Uveitis is swelling and irritation of the uvea, the middle layer of the eye. The uvea provides most of the blood supply to the retina.

Uveitis can be caused by autoimmune disorders such as rheumatoid arthritis or ankylosing spondylitis, infection, or exposure to toxins. However, in many cases the cause is unknown.

The most common form of uveitis is anterior uveitis, which involves inflammation in the front part of the eye. It is often called iritis because it usually only affects the iris, the colored part of the eye. The inflammation may be associated with autoimmune diseases, but most cases occur in healthy people. The disorder may affect only one eye. It is most common in young and middle-aged people.

Posterior uveitis affects the back part of the uvea, and involves primarily the choroid, a layer of blood vessels and connective tissue in the middle part of the eye. This type of uveitis is called choroiditis. If the retina is also involved, it is called chorioretinitis. You may develop this condition if you have had a body-wide (systemic) infection or if you have an autoimmune disease.

Another form of uveitis is pars planitis. This inflammation affects the narrowed area (pars plana) between the colored part of the eye (iris) and the choroid. Pars planitis usually occurs in young men and is generally not associated with any other disease. However, some evidence suggests it may be linked to Crohn's disease and possibly multiple sclerosis.

Uveitis can be associated with any of the following:

Uveitis can affect one or both eyes. Symptoms may develop rapidly and can include:

A complete medical history and eye examination should be performed. Laboratory tests may be done to rule out infection or an autoimmune disorder.

Persons over age 25 with pars planitis should have an MRI of their brain and spine to rule out multiple sclerosis. 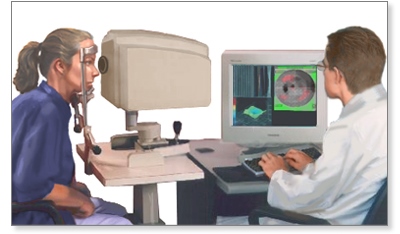 Central and peripheral vision is tested by using visual field tests. Changes may indicate eye diseases, such as glaucoma or retinitis.

Pars planitis is often treated with steroid eye drops. Other medicines, including steroids taken by mouth, may be prescribed to help suppress the immune system.

Posterior uveitis treatment depends on the underlying cause but almost always includes steroids taken by mouth. Additional specialists in infectious disease or autoimmunity may be needed for such diseases as syphilis, tuberculosis, AIDS, sarcoidosis, or Behcet syndrome.

If the uveitis is caused by a body-wide infection, treatment may involve antibiotics and powerful anti-inflammatory medicines called corticosteroids. See autoimmune disorders for information on treating such diseases.

With proper treatment, most attacks of anterior uveitis go away in a few days to weeks. However, relapses are common.

Inflammation related to posterior uveitis may last from months to years and may cause permanent vision damage, even with treatment.

Call for an appointment with your health care provider if you have symptoms of uveitis. Eye pain or reduced vision are urgent symptoms that require prompt medical attention.

Treatment of an underlying disorder may help to prevent uveitis in persons with a body-wide (systemic) infection or disease.

Painful or Irritated Eye (male | female)
Теги:
uvea
uveitis
eye
choroid
Синонимы:
Iritis; Pars planitis; Choroiditis; Chorioretinitis; Anterior uveitis; Posterior uveitis
Information presented on this website is for general use. It intended to address issues of your concern. It is not intended to serve as a basis for professional diagnosis and treatment of diseases or health conditions.
Should you have health problems we suggest you to seek assistance from a licensed healthcare professional and medical organization. In the case of a medical emergency, please call emergency services immediately.