Vitiligo is a skin condition in which there is a loss of color (pigment) from areas of skin. This results in uneven white patches that have no pigment, but the skin feels like normal. 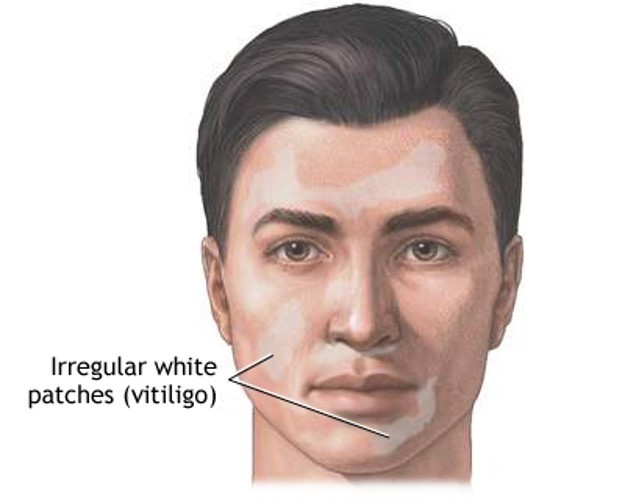 Vitiligo seems to occur when immune cells destroy the cells that make brown pigment (melanocytes). This destruction is thought to be due to an autoimmune problem. But, the exact cause of vitiligo is unknown.

Vitiligo may appear at any age. There is an increased rate of the condition in some families.

Vitiligo is associated with other autoimmune diseases:

Flat areas of normal-feeling skin without any pigment appear suddenly or gradually. These areas have a darker border. The edges are well defined, but irregular.

Vitiligo most often affects the face, elbows and knees, back of the hands and feet, and genitals. It affects both sides of the body equally.

Vitiligo is more noticeable in darker-skinned people because of the contrast of white patches against dark skin.

No other skin changes occur.

Your health care provider can usually examine your skin to confirm the diagnosis.

Sometimes, the provider may use a Wood light. This is a handheld ultraviolet light that causes the areas of skin with less pigment to glow bright white.

In some cases, a skin biopsy may be needed to rule out other causes of pigment loss. Your provider may also perform blood tests to check the levels of thyroid or other hormones, glucose level, and vitamin B12.

Vitiligo is difficult to treat. Early treatment options include the following:

·         Phototherapy, a medical procedure in which your skin is carefully exposed to ultraviolet light. Phototherapy may be given alone, or after you take a drug that makes your skin sensitive to light. A dermatologist performs this treatment.

Skin may be moved (grafted) from normally pigmented areas and placed onto areas where there is pigment loss.

Several cover-up makeups or skin dyes can mask vitiligo. Ask your provider for the names of these products.

In extreme cases when most of the body is affected, the remaining skin that still has pigment may be depigmented. This is a permanent change that is used as a last option.

It is important to remember that skin without pigment is at greater risk for sun damage. Be sure to apply a broad-spectrum (UVA and UVB), high-SPF sunscreen or sunblock. Sunscreen can also be helpful for making the condition less noticeable, because unaffected skin may not darken in the sun. Use other safeguards against sun exposure, such as wearing a hat with a broad rim and long sleeve shirt and pants.

The course of vitiligo varies and is unpredictable. Some areas may regain normal pigment (coloring), but other new areas of pigment loss may appear. Skin that is repigmented may be slightly lighter or darker than the surrounding skin. Pigment loss may get worse over time.

Call for an appointment with your provider if areas of your skin lose their coloring for no reason (for example, there was no injury to the skin).

Теги:
витилиго
пятно белого цвета на коже
изменение окрски кожи
Information presented on this website is for general use. It intended to address issues of your concern. It is not intended to serve as a basis for professional diagnosis and treatment of diseases or health conditions.
Should you have health problems we suggest you to seek assistance from a licensed healthcare professional and medical organization. In the case of a medical emergency, please call emergency services immediately.