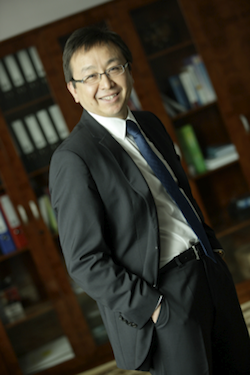 Graduated from Asfendiyarov National Medical University, Almaz Sharman has 30 years experience in the fields of academic medicine and  healthcare management.

Currently, Dr. Sharman is president of Academy of Preventive Medicine. The Academy is Kazakhstan’s largest nongovernmental organization founded in 1995. It’s mission is to study socio-economic determinants of health and to provide a powerful voice and organizational structure for the advancement of measures for the promotion of health, the prevention of disease, the care of sick, and the rehabilitation of the disabled, improve the quality of personal and community health of the people of Kazakhstan through introducing the best international and local expertise in healthcare. The Academy presents to government, professional, and other bodies the consensus of public health workers’ opinions on healthy policy matters and serves to advance the professional position and interests of public health personnel. The Academy is a platform for advocacy and collective action in addressing public health challenges and opportunities.

In 200 – 2013, Dr. Sharman, served as Deputy Chairman of Executive Board at Nazarbayev University and Chairman of the Board of University’s Center for Life Sciences. One of strategic goals of Nazarbayev University is to create Academic Healthcare System to integrate biomedical research, patient care and medical education. At this position Dr. Sharman provided leadership in establishing university’s Center for Life Sciences, a biomedical research organization that focuses on genomics and personalized medicine, translational research, regenerative medicine, and clinical research. The Center is now fully functioning with a total of 30 research staff hired and trained, infrastructure built and equipped, five research grant applications approved by the Ministry of Education and Science with a total budget of $5M, and research partnerships established with leading academic centers: University of Pittsburgh, Duke University, Columbia University, and US National Institutes of Health.

In 2008, Almaz Sharman founded National Medical Holding and served as its first Chief Executive Officer and Chairman of the Board. The National Medical Holding (NMH), a pioneering project of Kazakhstan’s healthcare at country’s capital city of Astana. The mission of NMH is to introduce international standards of quality and safety of care, to ensure financial sustainability and growth, and to introduce innovative medical technologies. NMH is a joint stock company is now owned by Nazarbayev University. The majority (85%) of NMH funding comes from the Health Ministry and the rest (15%) comes from private sources. As NMH CEO the task of Dr. Sharman was to coordinate commissioning of NMH hospitals (buildings, medical equipment, infrastructure), establish corporate management system, hire key staff, provide strategic management, and coordinate the development and implementation of business plans and key performance indicators. Currently the NMH comprises six state-of-the-art tertiary care hospitals with a total capacity of 1500 in-patient beds operating in the areas of maternal and child care, emergency care, cardiology and cardiac surgery, neurosurgery, internal medicine, nuclear medicine, and rehabilitation. Over 3000 doctors, nurses and ancillary staff provide patient care at NMH hospitals. NMH’s Center for Maternal and Child Health was accredited by the Joint Commission International. It is the first hospital of such scale in post-soviet countries to receive the Joint Commission accreditation. At NMH’s Center for Cardiac Surgery first heart ventricular assistance device implantation and first heart transplant surgery were performed. Since 2010, when NMH became part of Nazarbayev University, serve as a member of NMH Board responsible for Academic Healthcare System.

In 2004 – 2006 Almaz Sharman was Coordinator for Kazakhstan at US Agency for International Development (USAID)  .  At this senior-level position Dr. Sharman served a primary liaison official for the US Government assistance program with the Government of Kazakhstan, U.S. Embassy, USAID contractors and grantees, and international donor organizations. Responsibilities included monitoring and coordination of a broad technical assistance program in the areas of fiscal reform, enterprise development, democratization, financial reform, NGO development, health reform, infectious disease, and energy and environment. With understanding of the importance of resource management focused on establishing a dialogue and negotiations with the Government of Kazakhstan on a cost share agreement whereby the Government of Kazakhstan would actually pay a total of $15 million for USAID technical assistance. This agreement, the Program Economic Development has been signed and ratified by the Parliament of Kazakhstan. It is currently ongoing bilateral cooperation program. As a member of Kazakhstan National Council on Health have provided professional expertise and assistance to Kazakhstan’s Health Ministry in designing the National Health Reform Strategy, which has been described by The Lancet as “comprehensive and well conceived, based on contemporary ideas to health policy”.

In 2001-2004 Dr. Sharman worked as Infectious Disease Advisor for USAID Regional Office for Central Asia.  He provided technical leadership, expert advice, as well as assistance in strategic development, program and budget design, and project implementation of infectious disease prevention and control activities throughout the five Central Asia countries (Kazakhstan, Uzbekistan, Kyrgyz Republic, Tajikistan and Turkmenistan). The responsibilities included: 1) overall management and direction of the US Centers for Disease Control and Prevention’s (CDC) Central Asia Project; 2) overseeing Soros Network Regional Infectious Disease Prevention Program; 3) undertaking liaison between USAID/CAR offices, U.S. Embassies, donors and international organizations, and USAID contractors/grantees, as well as engaging in official personal contacts with high ranking officials from all countries in Central Asia to facilitate coordination of policies, approaches, and programs. As a member Country Coordination Mechanisms for the Global Fund to Fight Against HIV/AIDS, Tuberculosis and Malaria provided assistance to the governments of Kazakhstan, Kyrgyzstan and Uzbekistan in their applications to the Global Fund. This activity was resulted in the decision made by the Global Fund to provide grants to Kazakhstan, Kyrgyzstan and Uzbekistan in the amounts of $22.5 million, $15 million, and $25 million, respectively. Additionally, provided leadership in the establishment of a $450,000 Global Development Alliance (GDA) with U.S. company Becton Dickinson on HIV/AIDS monitoring, and based on that experience, pursued GDA opportunities with oil companies, commercial banks and other private entities working in Kazakhstan.

In 1997 – 2004 Almaz Sharman was involved in university teaching as Associate at Johns Hopkins University Bloomberg School of Public Health.

In1994 – 2001 Dr. Sharman worked at MEASURE DHS+ project funded by US Agency for International Development (USAID). He was responsible for coordinating all phases of demographic and health surveys (DHS) in Central Asia: Kazakhstan (1995, 1999), Uzbekistan (1996), Kyrgyz Republic (1997), Turkmenistan (2000). Responsibilities included initiation of the survey (assessment of data needs and survey feasibility, budget development and contract negotiations), as well as assistance to national survey implementing organizations with survey planning and design, recruiting the operational staff, interviewer training, fieldwork monitoring and supervision, data analysis, production of reports and dissemination of the survey results. Dr. Sharman also worked with the national ministries of health on development of policy recommendations based on the results of the DHS surveys. Was responsible for designing biomarker components for the surveys, such as testing for anemia, retinol, HIV, and malaria. In collaboration with U.S. Centers for Disease Control and Prevention (CDC) and United Nations Joint Program on AIDS (UNAIDS), was involved in designing a methodology for integrated population-based HIV testing. The methodology was implemented in several developing countries with high rates of HIV/AIDS, and has become a standard for DHS surveys. HIV testing data generated by using this methodology was used by UNAIDS to lower the estimate of the number of people afflicted by HIV in the world by 7 million cases. In 1997 and 1998, participated in a collaborative research project with Princeton University on reproductive health in the Central Asian Republics, which was resulted in a monograph and presentation to U.S. Congressional staff, and a series of recommendations to the governments of Central Asian countries on anemia prevention and reproductive health.

In 1991 – 1993, Almaz Sharman was a research fellow at University of Alabama at Birmingham, Immunobiology Vaccine Center. He worked as a member of international team of biomedical researchers on a US National Institutes of Health (NIH)-funded study of mucosal immunology and oral vaccine development. Main focus was on experimental models of hapten-induced inflammatory bowel disease and studying intraepithelial T lymphocytes.

ANEMIA AMONG WOMEN AND CHILDREN. Sharman, A. Goldberg, H. in: Centers for Disease Control and Prevention and ORC Macro. 2003. Reproductive, Maternal and Child Health in Eastern Europe and Eurasia: A Comparative Report. Atlanta, GA (USA) and Calverton, MD (USA). pp 155-163

FOOD SUBSTANCES AND THE FUNCTIONING OF THE CELLS OF THE IMMUNE SYSTEM. Sharman AT. Nutr Issues. 1990 Jan-Feb;(1):4-11

AN INCREASE IN ACTIVITY OF NATURAL KILLER CELLS IN RATS WITH VITAMIN A DEFICIENCY. Saparov AS, Kon IIa, Sharman AT. Nutr Issues. 1989 Mar-Apr;(2):30-2.