Crimean-Congo hemorrhagic fever (CCHF) is caused by infection with a tick-borne virus (Nairovirus) in the family Bunyaviridae. The disease was first characterized in the Crimea in 1944 and given the name Crimean hemorrhagic fever. It was then later recognized in 1969 as the cause of illness in the Congo, thus resulting in the current name of the disease.

Crimean-Congo hemorrhagic fever is found in Eastern Europe, particularly in the former Soviet Union, throughout the Mediterranean, in northwestern China, central Asia, southern Europe, Africa, the Middle East, and the Indian subcontinent. 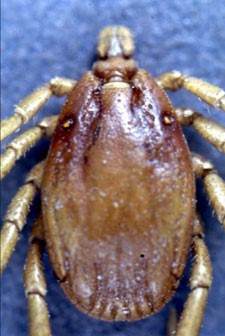 Ixodid (hard) ticks, especially those of the genus, Hyalomma, are both a reservoir and a vector for the CCHF virus. Numerous wild and domestic animals, such as cattle, goats, sheep and hares, serve as amplifying hosts for the virus. Transmission to humans occurs through contact with infected ticks or animal blood. CCHF can be transmitted from one infected human to another by contact with infectious blood or body fluids. Documented spread of CCHF has also occurred in hospitals due to improper sterilization of medical equipment, reuse of injection needles, and contamination of medical supplies.

The onset of CCHF is sudden, with initial signs and symptoms including headache, high fever, back pain, joint pain, stomach pain, and vomiting. Red eyes, a flushed face, a red throat, and petechiae (red spots) on the palate are common. Symptoms may also include jaundice, and in severe cases, changes in mood and sensory perception.

As the illness progresses, large areas of severe bruising, severe nosebleeds, and uncontrolled bleeding at injection sites can be seen, beginning on about the fourth day of illness and lasting for about two weeks. In documented outbreaks of CCHF, fatality rates in hospitalized patients have ranged from 9% to as high as 50%.

The long-term effects of CCHF infection have not been studied well enough in survivors to determine whether or not specific complications exist. However, recovery is slow. 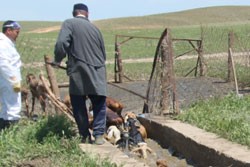 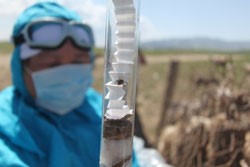 Laboratory tests that are used to diagnose CCHF include antigen-capture enzyme-linked immunosorbent assay (ELISA), real time polymerase chain reaction (RT-PCR), virus isolation attempts, and detection of antibody by ELISA (IgG and IgM). Laboratory diagnosis of a patient with a clinical history compatible with CCHF can be made during the acute phase of the disease by using the combination of detection of the viral antigen (ELISA antigen capture), viral RNA sequence (RT-PCR) in the blood or in tissues collected from a fatal case and virus isolation. Immunohistochemical staining can also show evidence of viral antigen in formalin-fixed tissues. Later in the course of the disease, in people surviving, antibodies can be found in the blood. But antigen, viral RNA and virus are no more present and detectable.

Treatment for CCHF is primarily supportive. Care should include careful attention to fluid balance and correction of electrolyte abnormalities, oxygenation and hemodynamic support, and appropriate treatment of secondary infections. The virus is sensitive in vitro to the antiviral drug ribavirin. It has been used in the treatment of CCHF patients reportedly with some benefit.

The long-term effects of CCHF infection have not been studied well enough in survivors to determine whether or not specific complications exist. However, recovery is slow. 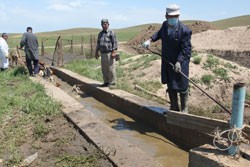 Agricultural workers and others working with animals should use insect repellent on exposed skin and clothing. Insect repellants containing DEET (N, N-diethyl-m-toluamide) are the most effective in warding off ticks. Wearing gloves and other protective clothing is recommended. Individuals should also avoid contact with the blood and body fluids of livestock or humans who show symptoms of infection. It is important for healthcare workers to use proper infection control precautions to prevent occupational exposure.

An inactivated, mouse-brain derived vaccine against CCHF has been developed and is used on a small scale in Eastern Europe. However, there is no safe and effective vaccine currently available for human use. Further research is needed to develop these potential vaccines as well as determine the efficacy of different treatment options including ribavirin and other antiviral drugs.

Теги:
что это Конго-Крымская геморрагическая лихорадка
симптомы лихорадки
причина лихорадки
лечение лихорадки
кровотечение.
Information presented on this website is for general use. It intended to address issues of your concern. It is not intended to serve as a basis for professional diagnosis and treatment of diseases or health conditions.
Should you have health problems we suggest you to seek assistance from a licensed healthcare professional and medical organization. In the case of a medical emergency, please call emergency services immediately.