Parkinson's disease is a disorder of the brain that leads to shaking (tremors) and difficulty with walking, movement, and coordination. 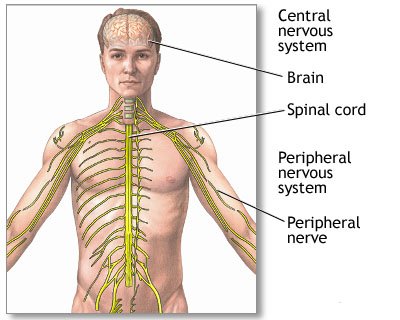 Nerve cells use a brain chemical called dopamine to help control muscle movement. Parkinson's disease occurs when the nerve cells in the brain that make dopamine are slowly destroyed. Without dopamine, the nerve cells in that part of the brain cannot properly send messages. This leads to the loss of muscle function. The damage gets worse with time. Exactly why these brain cells waste away is unknown.

Parkinson's is rare in children. It may occur because the nerves are not as sensitive to dopamine.

The term "parkinsonism" refers to any condition that involves the types of movement changes seen in Parkinson's disease. Parkinsonism may be caused by other disorders (called secondary parkinsonism) or certain medications.

Symptoms may be mild at first. For instance, you may have a mild tremor or a slight feeling that one leg or foot is stiff and dragging. Symptoms may affect one or both sides of the body, and can include:

Movement problems, which include:

Low blood pressure when getting up, sweating, drooling, lack of body temperature control. These problems are due to something called autonomic dysfunction.

Other symptoms may include:

Your health care provider may be able to diagnose Parkinson's disease based on your symptoms and a physical examination. However, the symptoms can be difficult to assess, particularly in the elderly. They become more clear as the illness gets worse.

A doctor's examination may show:

Tests may be needed to rule out other disorders that cause similar symptoms.

There is no known cure for Parkinson's disease. The goal of treatment is to control symptoms.

Medications control symptoms, mostly by increasing the levels of dopamine in the brain. At certain points during the day, the helpful effects of the medication often wears off, and symptoms can return. If this happens to you, your health care provider may need to change the:

Work closely with your doctors and therapists to find a treatment program that works best for you. Never change or stop taking any medications without talking with your doctor.

Many medications can cause severe side effects, including hallucinations, nausea, vomiting, diarrhea, and delirium. Monitoring and follow-up by the health care provider is important.

Eventually, symptoms such as stooped posture, frozen movements, and speech difficulties may not respond very well to drug treatment.

Medications used to treat movement-related symptoms of Parkinson's disease include:

Other medications may include:

Lifestyle changes may be helpful for Parkinson's disease:

Good general nutrition and health. Changes in what you eat or drink are needed if there are swallowing problems

Railings or banisters placed in commonly used areas of the house. Other changes may be needed around the home to prevent falls and make the bathroom safe.

Surgery may be an option for some patients with Parkinson's disease. These surgeries do not cure Parkinson's, but may help ease symptoms.

Another type of surgery destroys brain issues that cause Parkinson's symptoms.

Stem cell transplant and other clinical trials are currently ongoing in the USA. For information, see: www.pdtrials.org

Untreated, the disorder will get worse until a person is totally disabled. Parkinson's may lead to a deterioration of all brain functions, and an early death.

Most people respond to medications. How much the medications relieve symptoms, and for how long can be very different in each person. The side effects of medications may be severe.

Call your health care provider if:

Also tell the health care provider about medication side effects, which may include:

Also call your health care provider if the condition gets worse and home care is no longer possible.

Twitching and Tremor (male | female)
Information presented on this website is for general use. It intended to address issues of your concern. It is not intended to serve as a basis for professional diagnosis and treatment of diseases or health conditions.
Should you have health problems we suggest you to seek assistance from a licensed healthcare professional and medical organization. In the case of a medical emergency, please call emergency services immediately.